The No. 2 University of Florida softball team (56-2, 24-1 SEC) set two more school records as they completed the series sweep of Auburn (34-19, 10-14, SEC) on Sunday afternoon at Katie Seashole Pressly Stadium. In the 10-1 win in five innings, the team set a new school record for home runs in a season with 50 and junior pitcher Stacey Nelson recorded her 35th win in the circle, besting her own school record.

Florida hit two home runs in the game, one by junior Kim Waleszonia to lead off the first inning and one by junior Ali Gardiner in the third. Waleszonia’s home run tied the school record of 49, set by the 2007 squad, while Gardiner’s set the new standard.

Home runs were not the only order of the day for the Florida offense, as the team tallied 11 hits on the day, including six for extra bases. Three Gators finished the day with perfect batting averages. Sophomore Francesca Enea finished the day 3-for-3 with a double, a run scored and an RBI. Junior Kristina Hilberth and freshman Aja Paculba each finished 2-for-2. Paculba hit a double, scored three runs and drove in two RBI, while Hilberth hit a triple, scored one run and drove in a team high three RBI.

Nelson held Auburn to only two hits, while striking out seven batters to improve to a school record 35-2 on the season. Her 35 wins tops her own school record of 34, set last season with the win over Texas A&M in the second game of Super Regional play.

Florida plays its final regular season games this week as it travels to Knoxville, Tenn. to face the Tennessee Volunteers. Saturday’s doubleheader is slated for 1 p.m.
Read More 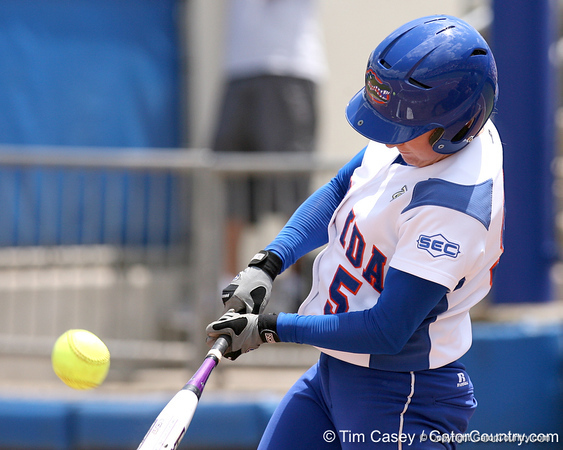 during the Gators' 10-1 win against the Auburn Tigers on Sunday, April 27, 2008 at Katie Seashole Pressly Softball Stadium in Gainesville, Fla.