PALATKA -- Former Lincoln High (Tallahassee) Head Coach Kyle Rice lead the Trojans to the Class 4A state championship game a year ago. In looking for a new challenge, he would end up at Palatka High School, a one-time powerhouse that has been down on his luck in recent years. That trend figures to change, beginning with the 2009 season.

Gator Country had the opportunity to observe practice at Palatka High School on Monday afternoon, and the Panthers look to be well on their way to a successful fall campaign. 6-foot-8, 270-pound senior tight end Keyshawn Hamilton (#33) is in his first year of playing football, but figures to be a real factor on this team. His size and athletic ability are a match-up nightmare for opposing defenses, and despite the fact he is incredibly raw, Hamilton has one thing you can't teach – incredible height.

Hamilton isn't the only player that stands out for this bunch. Junior running back/returner Kion Williams (#19) put on a show at the Swamp for Friday Night Lights back in July, and figures to do the same in stadiums around North Central Florida this coming season as well. At 5-foot-11, 185 pounds, with breakaway speed, he could prove to be just as highly recruited as his Uncle, former Palatka, University of Florida, and NFL standout running back John L. Williams.

Keep an eye on senior safety Billy Sampson (#8), junior quarterback Lavaris McCullough (#12), and linemen Charles Calloway (#65), Ray Drayton (#55), and Herbie Friday, among others. While it's a new season, new coach, and new direction, the fine folks of Palatka hopes its just a return for the winning ways of old in 2009. We wish them luck, and thank them for welcoming Gator Country in on Monday afternoon.
Read More 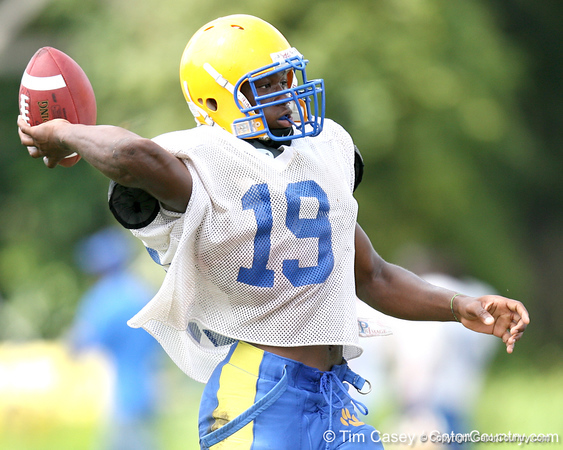